Warung Tiga Putri is not your typical warung . Although it sells snacks, cigarettes and assorted knick-knacks like countless other ramshackle convenience stores across Indonesia’s towns and cities, the tiny bright-yellow kiosk does much more for it is one of Indonesia’s growing number of smart warung . No fewer than five CCTV cameras at the busy Jakarta kiosk collect data on customers, such as their approximate age and sex, which is later analysed to improve marketing, distribution and engagement.

The concept is the brainchild of Warung Pintar, a local tech start-up that has transformed more than 1,000 warung and counting in Jakarta and other Indonesian cities.

For the kiosk’s owner, Junaidi Salad, Warung Pintar has been a godsend. Before the company approached him about turning his 1.5-metre-wide kiosk into the first-ever smart warung , the 32-year-old was worried about being evicted from the roadside he had illegally occupied for several years. The tech start-up – whose co-founders used to work with Jakarta-based venture capitalist East Ventures – helped Salad gain legal status by moving the kiosk to the car park of one of its co-working spaces, where he doesn’t have to pay rent or for electricity. 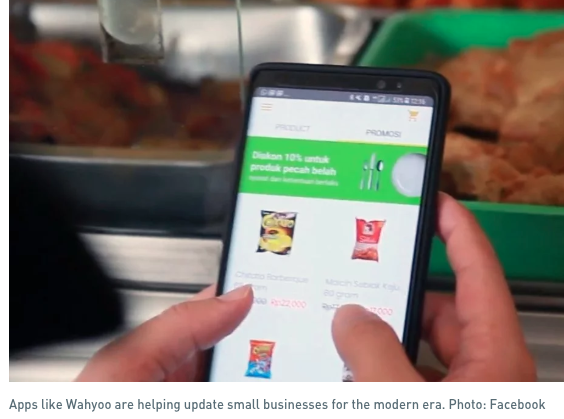 Warung Pintar isn’t alone in its efforts. Wahyoo, another start-up, aims to modernise food kiosks known as warteg that are scattered in Indonesia’s big cities. Much like Warung Pintar, Wahyoo is streamlining supply chains: wartegowners can now order bottled water, beverages, eggs, cooking oil, sugar, flour, tea, and coffee through a Wahyoo app. The company now has over 2,000 wartegunder its name, up from 50 soon after it was founded in April last year.

“There are only a few warteg that are really clean, and that’s what deters people from eating in them. Despite that, warteg are always full,” said Wahyoo founder Peter Shearer. “We want to be the biggest digital warung operator in Indonesia. In the future we want to enable a point-of-sale system that will allow us to find out the bestsellers on the menu and identify consumers’ profiles.”